In this blog post I’ll be sharing information about the new animal species being added to Eco in the 9.0 Update! Several new large animals and many smaller species have been added, putting us much closer to our goal of having the building blocks of an interesting ecosystem present in each biome.

As always, let’s start with the overview over our Eco Update 9.0 Blogs:

In Eco, species have so far been selected to maintain a consistent thematic continental inspiration: The Americas. North American species are prominent in grasslands, and colder biomes like tundra and taiga. The Eco world is its own, and we are certainly not trying to simulate the Americas, but it makes sense when making a game about preserving a fragile and complicated ecosystem to try to look at ecosystems on earth as a whole, rather than mixing and matching random species. In Biomes like the desert, rainforest, and wetlands, the continental inspirations have expanded in 9.0 to Central and South American species. In particular, species are often chosen because they have an interesting or important role in their real world ecosystem.

In the Rainforest biome, the big newcomers are the Agouti and the Jaguar!

The Agouti is a large rodent species that feeds mostly on fruits and nuts in the rainforest. The rainforest in Eco 9.0 is partly inspired by the Amazon tropical rainforest, where the Agouti has an interesting role. Agouti are both prolific buriers of seeds and also one of just a few species capable of opening some tropical tree nuts, which is required for those seeds to germinate. These propensities make the Agouti a key part of the health of rainforests.

In each biome there are multiple levels of consumers that rely on the plant producers of energy at the base of the food chain, and the obvious choice for an Amazon-inspired rainforest’s apex consumer is the Jaguar. The Jaguar is an iconic predator that like other apex predators can be considered a keystone species because of the pressure they exert on many of the other consumers in their ecosystem that otherwise would likely balloon and dominate the others. Of course, in Eco as in the real world, humans subvert apex predator’s position in the food chain and it will be up to players to monitor how their activities impact the natural hierarchies around them. 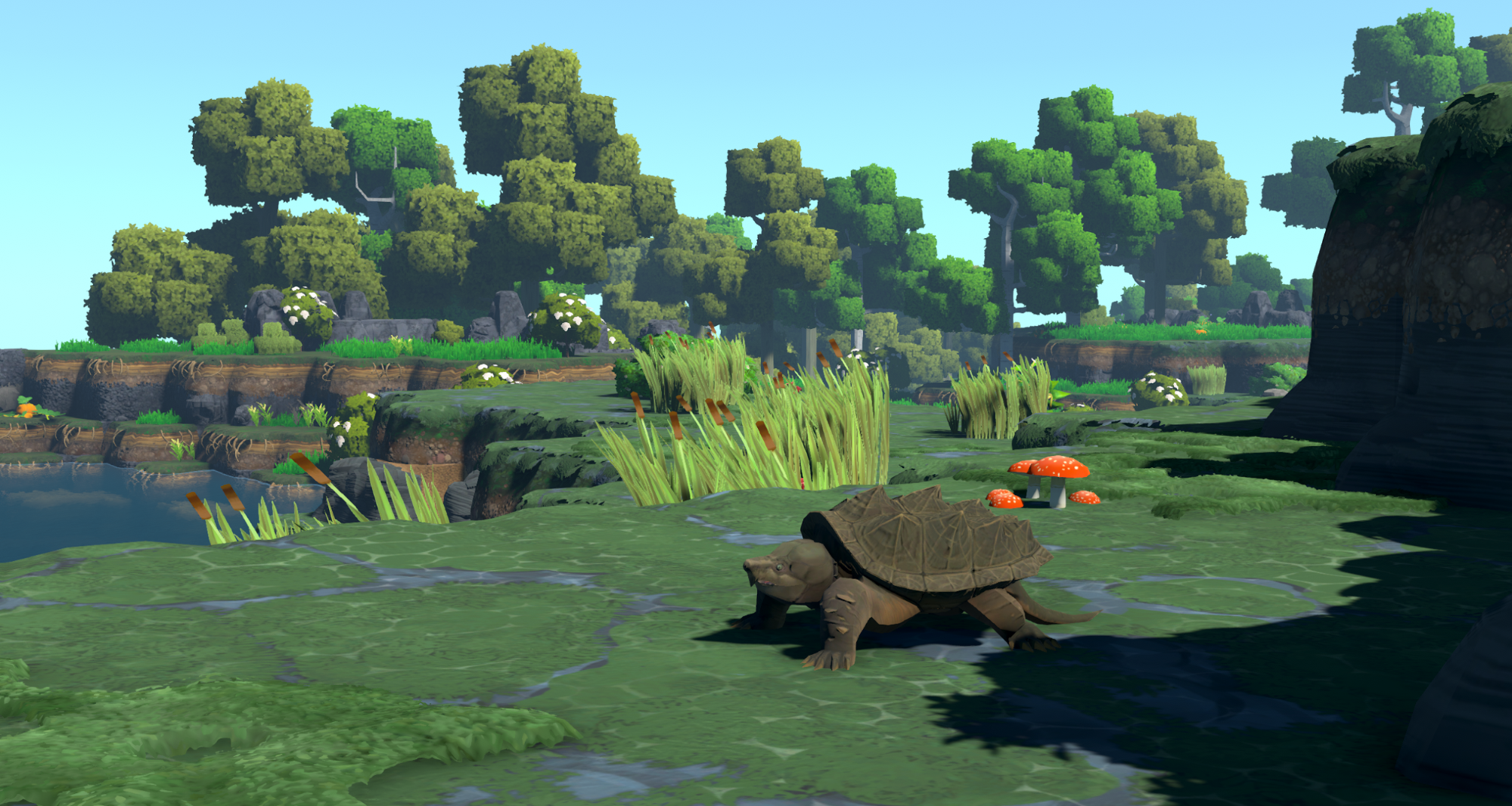 In the Wetlands biome which as of 9.0 is still heavily in-progress, we have added two new animals: The Snapping Turtle and the Alligator. The Snapping Turtle is inspired by the Alligator Snapping Turtle, which inhabits freshwater areas of the U.S. in the real world. These turtles are a very robust species with long possible lifespans and keen abilities when it comes to scavenging and predation of smaller (and even sometimes larger) animals. Snapping Turtles rely on a wide range of food sources, and are a good indicator of the overall health of wetlands and their invertebrates. They are an eccentric species and vulnerable to pollution and habitat destruction. 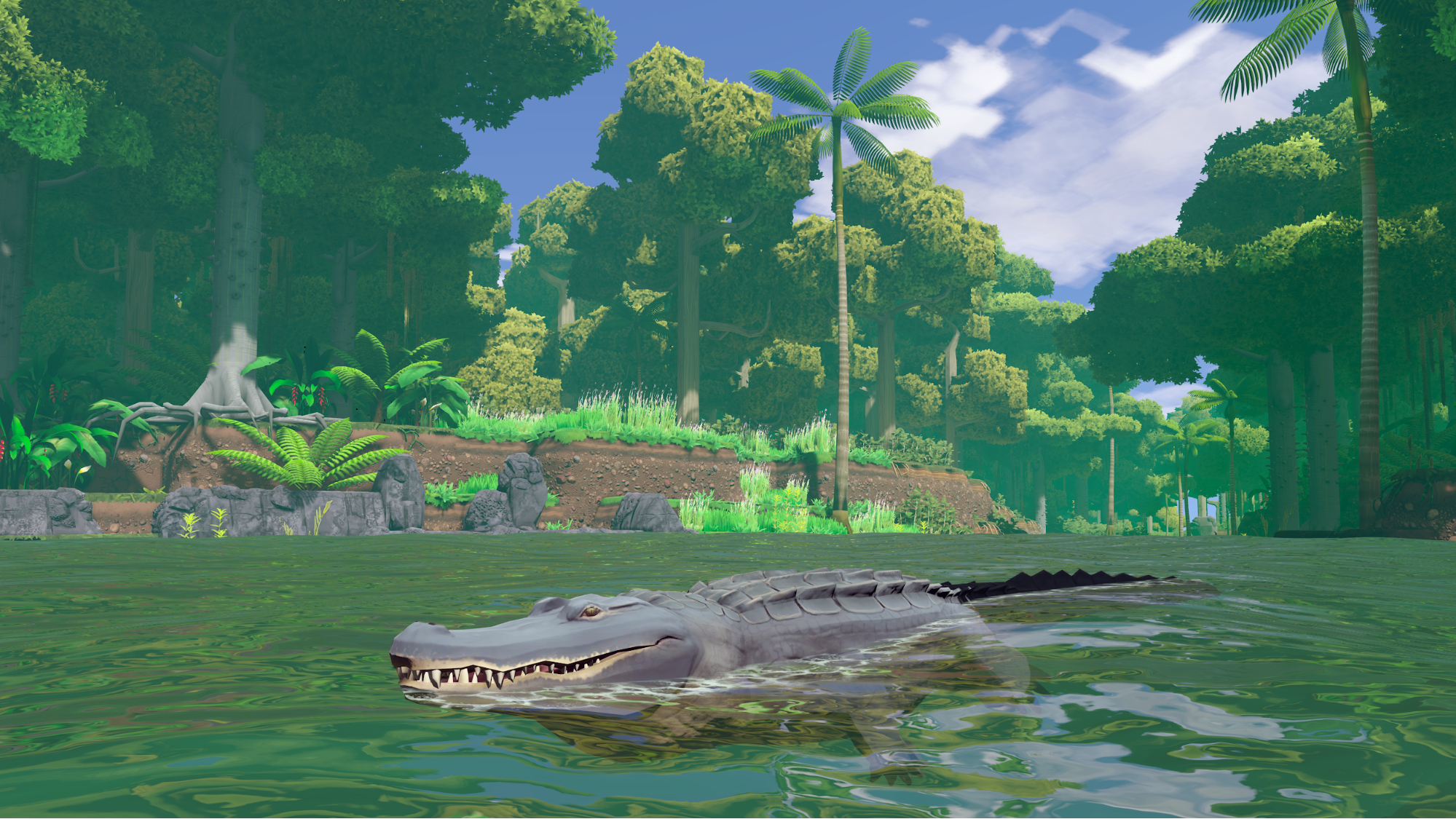 The Alligator is a mostly aquatic freshwater reptile that serves as the Wetlands apex predator. Alligators modify wetland environments, creating ‘Alligator holes’, which is something we hope to represent in the future in Eco as part of a nests and dens system. Alligators hunt many types of prey, preferring to do so from the water. Alligators sometimes hunt Alligator Snapping Turtles, but sometimes the reverse is also true! Watch your fingers in the Wetlands. Alligators also are known to consume one of our other new species: Crabs! 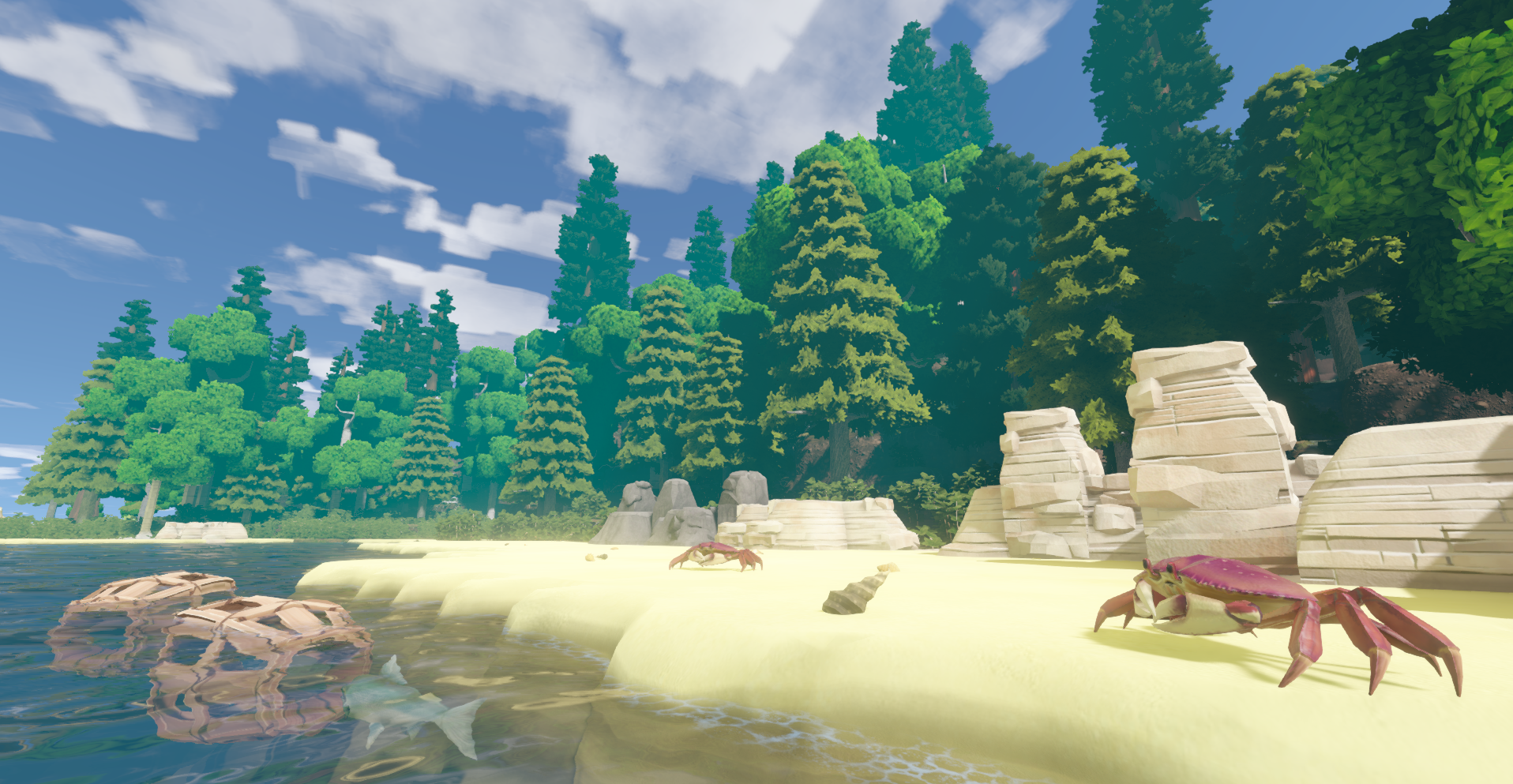 Based on Dungeness Crabs from Washington, Eco’s new Crab species is a marine crustacean that feeds on clams, mussels, and anything else it can scavenge on the sea floor. Crabs are a tempting source of protein for humans, and one which can be harvested sustainably more easily than more fragile species. Crabs, however, are vulnerable to warming and acidifying waters. 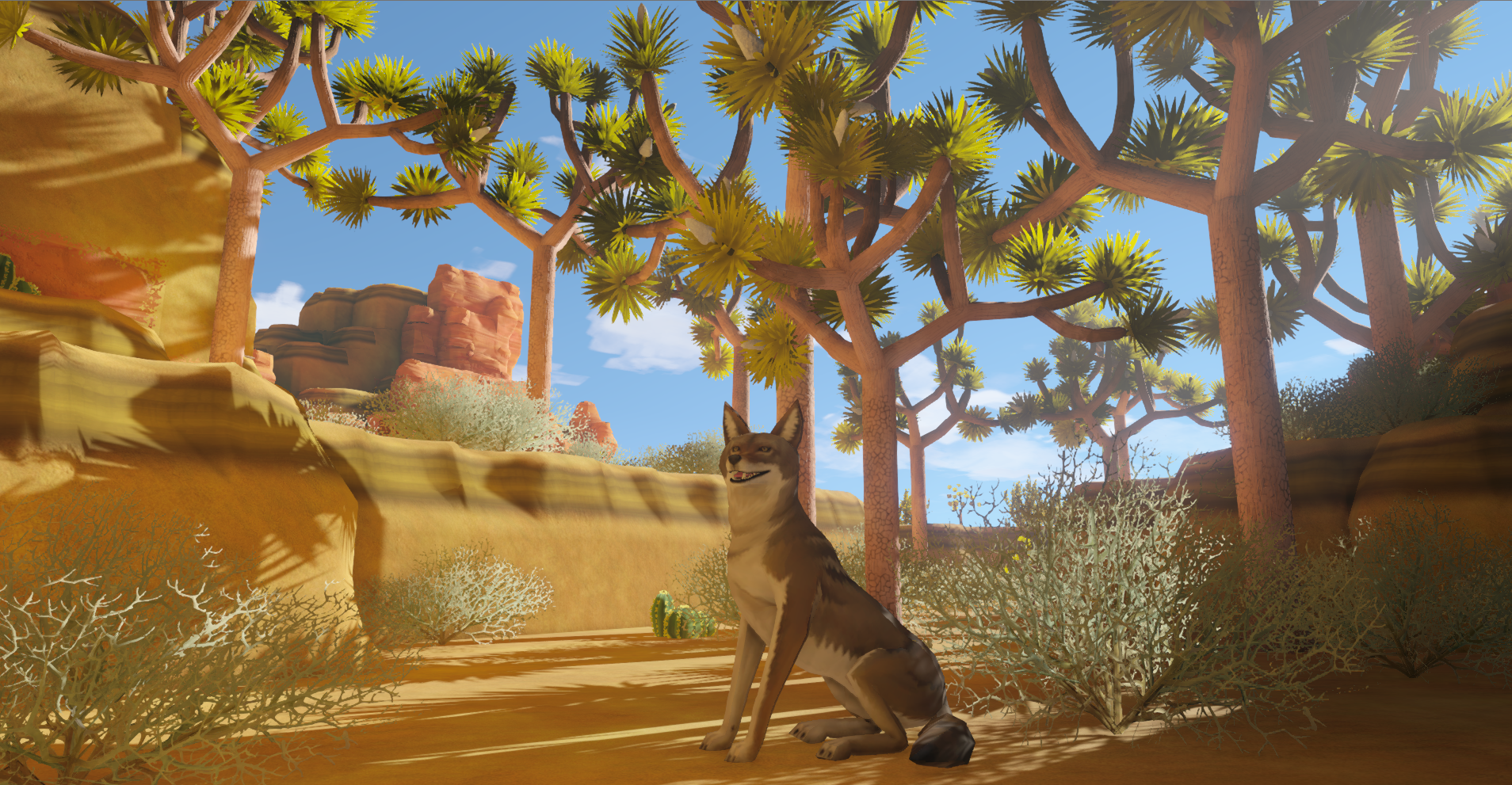 The Coyote is the main addition to deserts in Eco 9.0. Coyotes are fascinating animals that have made deep cultural impressions on people living along-side them. The Coyote’s biggest strengths are its adaptability and resilience. These predators of mostly small rodents and mammals can survive in many kinds of places and under many kinds of pressures. It is thought that human pressure on Coyotes may have actually resulted in a smarter and tougher population of Coyotes. Coyotes represent a different kind of consideration for players– how do you live with a species that is just about as adaptable as you are? Hopefully not with an endless campaign of extermination based on poor science, as has unfortunately occurred and still occurs today in the United States. Up to you though!

In addition to these new animals, we also upgraded the look of our Wolf species, which has always been based on the Grey Wolf. 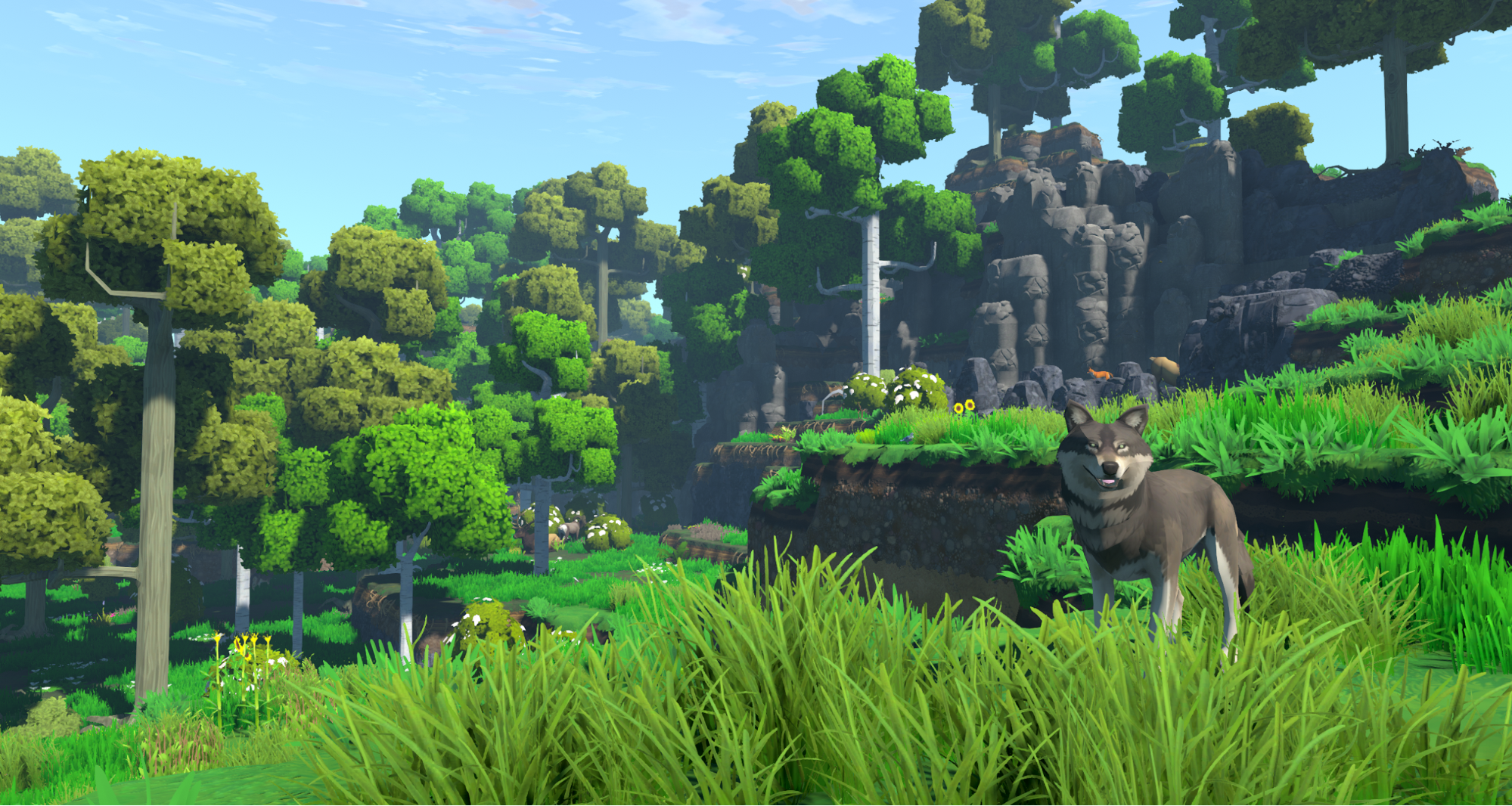 That wraps it up for terrestrial animals, but in 9.0 we have also begun expanding the species that live in the sea and in freshwater!

New to marine environments in 9.0 are Moon Jellyfish, Cod based on the Atlantic Cod, Sardines, and Blue Sharks! This suite of additions is designed to start fleshing out marine ecosystems in preparation for further big updates to Eco’s oceans and waterways, especially for boating and fishing in the next patch!

In addition to these sea-based species, we have added a Bass fish based on the Largemouth Bass to freshwaters in Eco.

In 9.0 we have also begun to expand the behaviour possibilities of animals in Eco. Now, certain species have the ability to defend themselves if you get too close. Various species will now briefly attack the player before fleeing. In addition to this new behaviour, many animations have been added and improved for animals turning in place, along with other improvements. It’s always best to give wildlife space!

Finally, we have begun to add many more indications of invertebrate life to the ecosystems in Eco, with bees, spiders, grasshoppers, and more. Eventually the intention is to have indicators of invertebrate health in the local ecosystems tied to the appearance of these more decorative species, with some larger species being quite dependent on them such as birds and smaller mammals. We look forward to continuing to deepen and expand Eco’s wildlife and representation of the impressive and unique ecosystems we have on planet Earth. 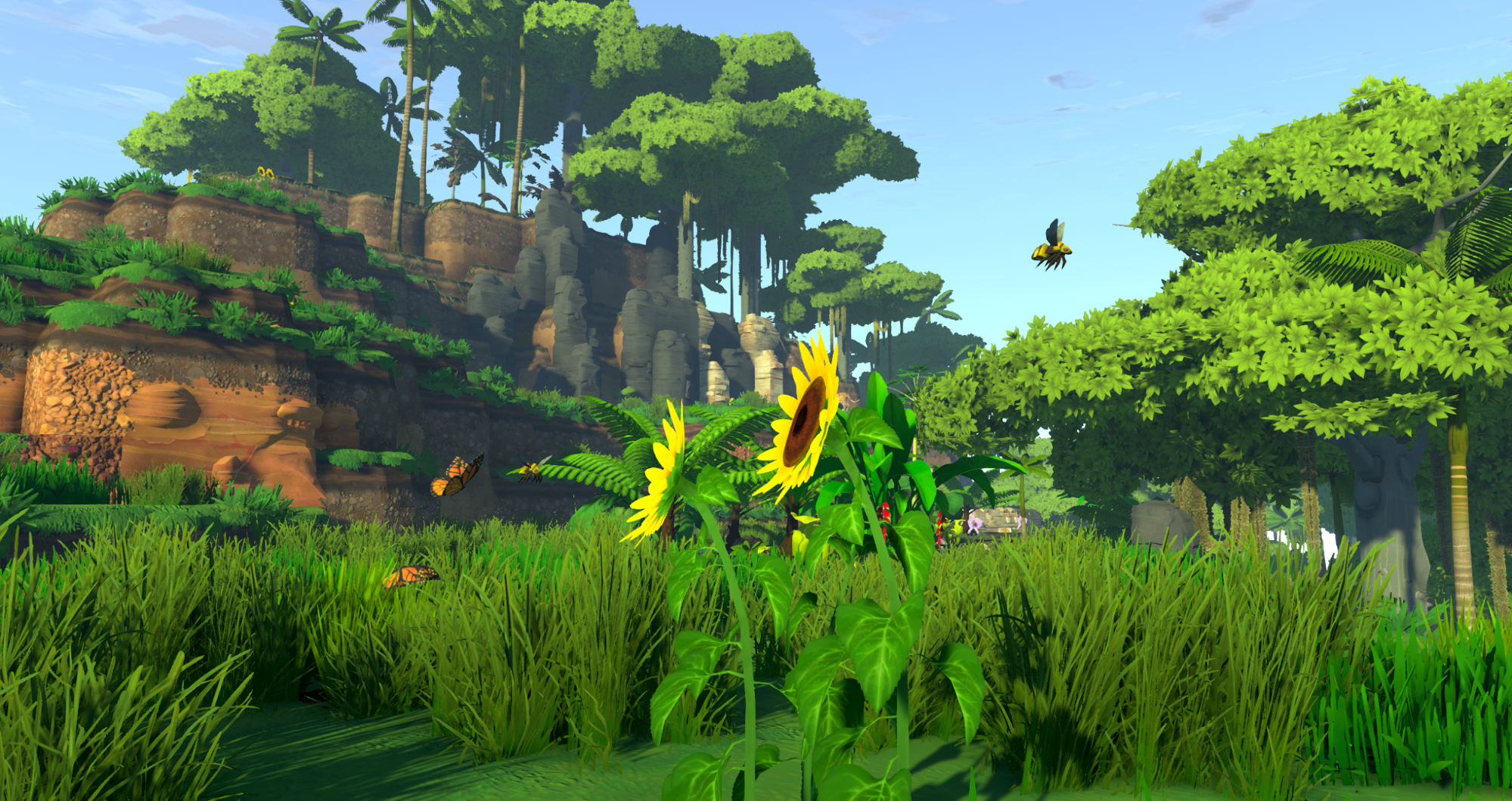 Before we wrap this blog up, our Community Manager Dennis has a request:
We’re currently looking for pupils (or recently graduated persons) aged 12 – 19 that have played Eco and would be interested in giving a short (10 – 20 minutes) and anonymous audio-only interview (english or german) about their experience with our game for the project “DiSpielGeo” (https://dispielgeo.de/en/) conducted by the University of Cologne. Pupils under the legal age need written parental consent and the parents can of course take part in the interview.

The research is about the potential use of digital games (including Eco) for geography education. If you are either of legal age or a parent and interested in helping science out, please contact me at dennis@strangeloopgames.com. Please note that we cannot accept applications from minors directly, if you want to take part, you will need to ask your parents.

The Eco Team is a collection of introverted and sometimes genius programmers/designers based in Seattle and Australia. We all grew up and thrive in the video game culture, so of course making them is our dream job. We look forward to continuing to put out quality games for the community of players.

Our goal at Strange Loop Games is to use the massive power of today’s hardware for gameplay, not just graphics. We use deep, interactive simulations to explore the boundaries of what can be done within a game.